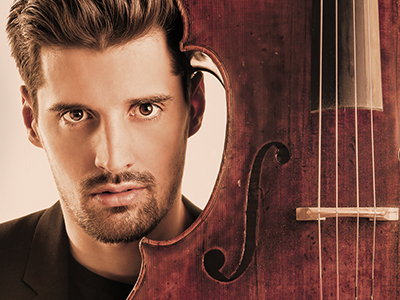 Luka Sulic performs throughout the world combining solo classical performances and as a member of internationally acclaimed super group 2CELLOS. He began his musical education in Maribor when he was five years old. When he was fifteen, he became one of the youngest students ever to enter the Music Academy in Zagreb in the class of Professor Valter Despalj, where he graduated aged only 18. He continued his education in Vienna with Professor Reinhard Latzko. Sulic finished his master's degree with distinction at the Royal Academy of Music in London in 2011.

NEW PROJECT: VIVALDI - “THE FOUR SEASONS” FOR CELLO
Luka Sulic is one of the most loved and appreciated musicians on the international scene for the virtuosity and passion he transmits at each performance. For his new project he will be the first musician in history to perform the full version of "The Four Seasons" by Vivaldi for solo cello. Luka has decided to perform a masterpiece he has always loved since he was a child and has been meticulously preparing for over 2 years in the original integral version for solo cello and orchestra.