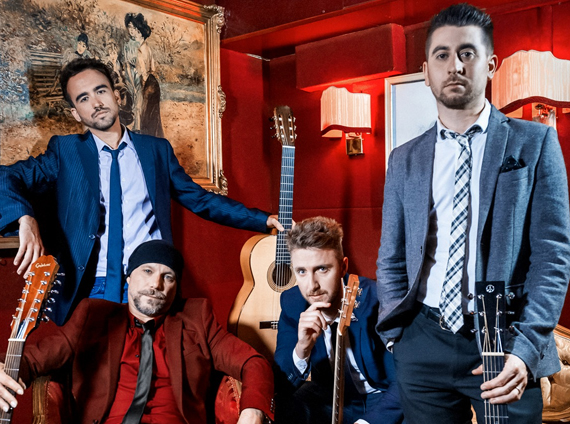 With more than 16 million views on Youtube, the Italian guitar quartet 40 Fingers is one of the new worlwide crossover phenomenon.

They were born in 2018 from four artists with entirely different musical background and each well-established on Italy’s music scene through their many individual projects.

These four guitar players are set on a mission to explore new galaxies of sound with a wide repertoire of original pieces and covers, which they perform in the fingerpicking technique and skillfully arranged for four guitars. Their musical treat based on the reinterpretation of a range of modern music classics, is equally at home in the styles of jazz and of Latin American music, creating a mesmerizing experience that brings the audience from popular movie scores to jazz, from Astor Piazzolla to the Beatles, from Eagles to Toto, from Dire Straits to Eric Clapton, all perfectly merged with their unique style and their original work and compositions.

After successfully releasing their music on the web, causing a sensation with the rearrangement of "Bohemian Rhapsody" by Queen which now counts more than 7 million views on YouTube, plus being highlighted by the official Queen website thanking them for creating such a lovely version of their famous tune, the passion that these four guitar players share for the world of film and film music has led them to a series of interesting covers of famous film scores, among which are the two key themes written by John Williams for Star Wars directed by George Lucas – the Main Theme and Imperial March medley.

Other videos on their Youtube page include covers of Astor Piazzolla's famous tune "Libertango", the "Game of Thrones" soundtrack, "The Last of the Mohicans" soundtrack, a medlye of classic Disney songs, Antonio Vivaldi's Estate from The Four Seasons and they are planning to release many more new arrangements ranging from classic rock hits to movie soundtracks and classical music.

40 Fingers are now touring Europe with the intent to capture and hypnotize the audience across all world.